Six City Strategy (Aika) is a strategy for sustainable urban development involving the six largest cities in Finland (Helsinki, Espoo, Tampere, Vantaa, Oulu and Turku). These cities represent about 30% of the country’s total population and their co-development projects have a national impact.

The strategy aims to use the largest urban regions as an environment for developing new innovations and strengthening Finland’s competitiveness. The 6Aika strategy allows these cities to experiment on a larger scale than they could do individually. Together, they are involved in creating a shared data system, an open innovation platform, or sharing customer services. Cities are also testing robotic buses and centers of circular economy.

Finland’s projects, like ours, are implemented in the areas of innovation, environment, mobility or education, and the amount of funds allocated to ITI in Finland is approximately 10 times lower (EUR 100 million), than the allocation for 7 agglomerations in the Czech Republic. An important emphasis is placed on innovation in the field of digital technologies and their use for example in healthcare.

The aim of the business trip was to acquire and exchange experience with the implementation of the ITI tool in Poland. The two-day program included a meeting with project managers from Polish cities and representatives from the Polish Ministry of Investment and Development.

Representatives of the Ministry presented the national perspective on the implementation of ITI in the current programming period, outlined future cooperation and challenges in the next programming period of 2021-2027 . During the business trip, a study excursion to the Copernicus Science Center in Warsaw took place together with the presentation of the project “School closer to learning”, which was funded by the ITI tool within the Warsaw Metropolitan Area.

The Polish cities of Warsaw, Krakow, Walbrzych and Bialystok and their ITI experience was introduced. Czech cities were represented by representatives from Brno, Prague, Ostrava, Pilsen, Olomouc, Hradec Králové and Pardubice. Thus, there were shared the practices of good examples that can be used in the Brno Metropolitan Area.

Thanks to these business trips, the Department of ITI Managament and Metropolitan Cooperation gained new insights into the development of the Metropolitan areas of Poland and Finland and was thus able to draw on future experience. At the same time, there was the opportunity to share good practice with other cities regarding the cooperation within the Brno Metropolitan Area. 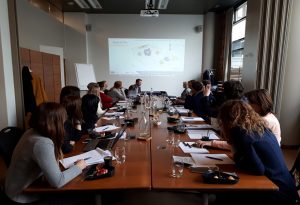